The Amount of Data and Bandwidth Required For Video Gaming

This is not your father’s video gaming.

Gone are the stiff, one- and two-dimensional video games of the past. Today, television screens are portals to other worlds where players see through the eyes of life-like characters. Players, also called gamers, use the video controller to move through vivid, three-dimensional scenes that range from maze-like corridors of ancient castles to ravaged, desolate towns of a zombie apocalypse. 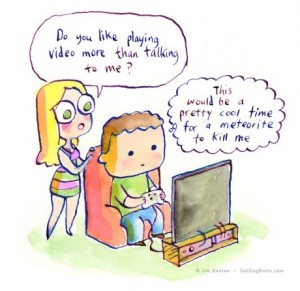 One important distinction to make is that gaming is NOT video. The displayed video of a game is part of the game files installed on your hardware. No video is sent or received when playing a game online. Only the telemetry data is being sent, not the full video.

A gaming community website like Twitch differs from video gaming. Twitch is a platform for video game-related content, including gaming talk shows and personal streams of individual players.

A very thorough experiment was completed on Reddit to calculate the bandwidth between several popular games. The test is documented at https://www.reddit.com/r/PS4/comments/1spnoj/aggregate_data_on_ps4_internet_usage/. It is also provided in it’s entirety by expanding the link below:

The purpose of this experiment was to determine how much bandwidth the PS4 uses during online gameplay. The games used for this experiment were Battlefield 4, Killzone: Shadow Fall, and FIFA 14. Data was also collected for Twitch streaming.

All devices connected to the router were in sleep mode or powered down in order to isolate data usage from the PS4. Results were collected using the router’s built-in traffic monitor through a web browser. The computer and the PS4 were connected via Ethernet to the router. Data collection began after the map had been loaded and the gameplay was underway.

Figure 1 Baseline Internet traffic test with no devices using the Internet and the PS4 turned off.

Figure 3 Shows a ten-minute snapshot of the bandwidth used by the PS4 during a game of Battlefield 4. The game type was Conquest on Zavod 311 and contained between 64-66 players during the time the data was collected.

Figure 4 Shows a ten-minute snapshot of the bandwidth used by the PS4 during a game of Killzone: Shadow Fall. The game type was 24-player death match on The Slums. The game contained 24 active players during the time the data was collected.

Figure 5 Shows a ten-minute snapshot of the bandwidth used by the PS4 during an online match of FIFA 14. An opponent was found online using the Seasons online game mode. The match was between PSG and Manchester City.

Figure 6 Shows the bandwidth used while streaming live gameplay to Twitch. The broadcast quality was set to Best. The stream did not include video from the PS Camera or audio from a microphone. The stream was of a Battlefield 4 game of Conquest with 64 players on the map Operation Locker.

Killzone: Shadow Fall consumed the most amount of data during a ten-minute interval (32.42MB). Battlefield 4 came in second (10.48MB), and FIFA 14 consumed the least (4.45MB). Streaming to Twitch consumed about 130.23MB of data in a ten-minute interval. This was calculated by subtracting the total upload bandwidth from Figure 3 from Figure 6 in order to estimate the data usage by streaming alone. Streaming to Twitch used approximately 2.66 Mbps at its peak while playing Battlefield 4, therefore having an upload bandwidth of 3 Mbps should suffice for streaming and playing online. For Killzone: Shadow Fall and possibly other, more bandwidth consuming games, an upload speed of at least 5 Mbps is recommended.

Although the bandwidth used between the three games varied, the PS4 generally uses very little bandwidth when playing online. This should help people that have a monthly bandwidth limit or are worried that their Internet speed is not adequate to game online.

As the experiment shows, online video gaming consumes data, but not as much as you would think. The most important considerations are low delay (or low latency), and high up (or sending) bandwidth, so plan on allocating at least 3 Mbps up for each player.

One User per Month 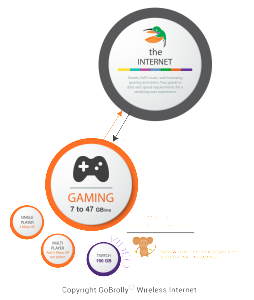 For two gamers playing locally, expect to use a minimum of 6 Mbps up. And in order to make everyone in the house happy, add a little extra, about 1.5 up, for those watching a movie on a different TV while the gamers are playing.

If you have a four-player online game, allocate at least 3 Mbps down for each player. A good game experience would need 12 Mbps down and 6 Mbps up. Add the extra for a movie watcher or two and it chalks up to be a 16 Mbps by 8 Mbps connection. The download bandwidth is not nearly as important as the upload bandwidth.

Using the figures extrapolated in the experiment, we can make educated guesses about data usage over a one-hour period:

In short, as you would expect, online gaming can eat up a portion of your plan. But GoBrolly is prepared with several plans that would more than handle a gamer’s appetite. We recommend starting with our Streaming Plus plan. You can always upgrade, it’s just that easy.

Read More About the Data and Bandwidth Requirements for Each Application

About the Jewel Program

GoBrolly® created the Jewel program at the end of 2014 to honor and recognize community assets. As a small business in a small community, GoBrolly® saw the need to bring to the forefront people who they feel make a difference in our area. Once selected as a GoBrolly® Jewel, GoBrolly® writes a blog post about the individual or business, and includes all online social avenues to contact or read more about the Jewel. GoBrolly® then places this post on many social media outlets like Facebook, Twitter, LinkedIn and Google+.